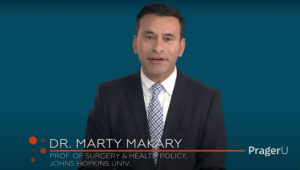 Makary, author of “The Price We Pay: What Broke American Healthcare And How To Fix It,” says there are two major reasons why the U.S. simply isn’t getting any healthier — even though we pay exorbitant prices for healthcare.

First, argues Makary, we fail to pay enough attention to our own health, even though it’s our greatest asset. Second, doctors don’t give enough focus to patients’ basic needs. “The healthcare system rewards us for doing things to people, not for people,” says Makary.

Americans have “a very expensive system to treat the most obese, medicated, comorbid population in the world,” he says.

For example, the number of drugs prescribed by doctors has doubled over the last ten years, and the rate of newly diagnosed Type-2 diabetes cases has increased by 4.8% per year. And during the pandemic, more than 78% of people hospitalized in the U.S. were either overweight or obese.

“So, what does the future look like,” asks Makary. “More sickness? More procedures? And more pills at an ever-increasing cost? Well, if we keep doing the same things we’ve been doing that haven’t worked for the last twenty-five years, the answer is yes.”

He says “most people with Type-2 diabetes can come off their insulin simply by changing what they eat,” adding that, “when disease can be cured by a lifestyle change, medication should be the last resort.”

“This requires a partnership between doctor and patient. Both have to make a commitment to get to the underlying cause of disease rather than simply treat symptoms,” says Makary.

Makary says that he and a “new wave of healthcare professionals” have been working on this approach.

Imagine healthcare professionals who treat diabetes with cooking classes, not just with insulin, or who treat back pain with ice, stretching, and physical therapy, rather than just with surgery by itself, says Makary. “We’re treating high blood pressure with healthy foods, yoga classes, stress management, and better sleep, instead of just putting people on pills,” he says.

Prager University is the world’s leading conservative nonprofit that is focused on changing minds through the creative use of digital media. Taking full advantage of today’s technology and social media, we educate millions of Americans and young people about the values that make America great.

The Daily Wire is one of America’s fastest-growing conservative media companies and counter-cultural outlets for news, opinion, and entertainment. Get inside access to The Daily Wire by becoming a member.